This is a fuller version, with links, of the comment piece published in Times Higher Education on 10 April 2008. Download newspaper version here.

If you still have any doubt about the problems of directed research, look at the trenchant editorial in Nature (3 April, 2008. Look also at the editorial in Science by Bruce Alberts. The UK’s establishment is busy pushing an agenda that is already fading in the USA.

Since this went to press, more sense about “Brain Gym” has appeared. First Jeremy Paxman had a good go on Newsnight. Skeptobot has posted links to the videos of the broadcast, which have now appeared on YouTube.

The Times Higher’s subeditor removed my snappy title and substituted this.

So here it is.

“HR is like many parts of modern businesses: a simple expense, and a burden on the backs of the productive workers”, “They don’t sell or produce: they consume. They are the amorphous support services” .

So wrote Luke Johnson recently in the Financial Times. He went on, “Training advisers are employed to distract everyone from doing their job with pointless courses”. Luke Johnson is no woolly-minded professor. He is in the Times’ Power 100 list, he organised the acquisition of PizzaExpress before he turned 30 and he now runs Channel 4 TV.

Why is it that Human Resources (you know, the folks we used to call Personnel) have acquired such a bad public image? It is not only in universities that this has happened. It seems to be universal, and worldwide. Well here are a few reasons.

Like most groups of people, HR is intent on expanding its power and status. That is precisely why they changed their name from Personnel to HR. As Personnel Managers they were seen as a service, and even, heaven forbid, on the side of the employees. As Human Resources they become part of the senior management team, and see themselves not as providing a service, but as managing people. My concern is the effect that change is having on science, but it seems that the effects on pizza sales are not greatly different.

The problem with having HR people (or lawyers, or any other non-scientists) managing science is simple. They have no idea how it works. They seem to think that every activity
can be run as though it was Wal-Mart That idea is old-fashioned even in management circles. Good employers have hit on the bright idea that people work best when they are not constantly harassed and when they feel that they are assessed fairly. If the best people don’t feel that, they just leave at the first opportunity. That is why the culture of managerialism and audit. though rampant, will do harm in the end to any university that embraces it.

As it happens, there was a good example this week of the damage that can be inflicted on intellectual standards by the HR mentality. As a research assistant, I was sent the Human Resources Division Staff Development and Training booklet. Some of the courses they run are quite reasonable. Others amount to little more than the promotion of quackery. Here are three examples. We are offered a courses in “Self-hypnosis”, in “Innovations for Researchers” and in “Communication and Learning: Recent Theories and Methodologies”. What’s wrong with them? 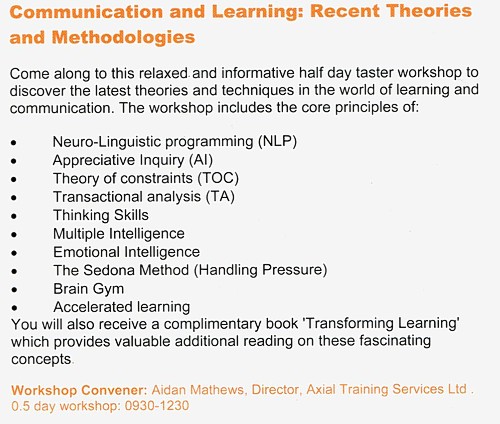 “Self-hypnosis” seems to be nothing more than a pretentious word for relaxation. The person who is teaching researchers to innovate left science straight after his PhD and then did courses in “neurolinguistic programming” and life-coaching (the Carole Caplin of academia perhaps?). How that qualifies him to teach scientists to be innovative in research may not be obvious.

The third course teaches, among other things, the “core principles” of neurolinguistic programming, the Sedona method (“Your key to lasting happiness, success, peace and well-being”), and, wait for it, Brain Gym. This booklet arrived within a day or two of Ben
Goldacre’s spectacular demolition of Brain Gym “Nonsense dressed up as neuroscience”

“Brain Gym is a set of perfectly good fun exercise break ideas for kids, which costs a packet and comes attached to a bizarre and entirely bogus pseudoscientific explanatory framework”

“This ridiculousness comes at very great cost, paid for by you, the taxpayer, in thousands of state schools. It is peddled directly to your children by their credulous and apparently moronic teachers”

And now, it seems, peddled to your researchers by your credulous and
moronic HR department.

Neurolinguistic programming is an equally discredited form of psycho-babble, the dubious status of which was highlighted in a Beyerstein’s 1995 review, from Simon Fraser University.

“ Pop-psychology. The human potential movement and the fringe areas of psychotherapy also harbor a number of other scientifically questionable panaceas. Among these are Scientology, Neurolinguistic Programming, Re-birthing and Primal Scream Therapy which have never provided a scientifically acceptable rationale or evidence to support their therapeutic claims.”

The intellectual standards for many of the training courses that are inflicted on young researchers seem to be roughly on a par with the self-help pages of a downmarket women’s magazine. It is the Norman Vincent Peale approach to education. Uhuh, sorry, not education, but training. Michael O’Donnell defined Education as “Elitist activity. Cost ineffective. Unpopular with Grey Suits . Now largely replaced by Training .”

In the UK most good universities have stayed fairly free of quackery (the exceptions being the sixteen post-1992 universities that give BSc degrees in things like homeopathy). But now it is creeping in though the back door of credulous HR departments. Admittedly UCL Hospitals Trust recently advertised for spiritual healers, but that is the NHS not a university. The job specification form for spiritual healers was, it’s true, a pretty good example of the HR box-ticking mentality. You are in as long as you could tick the box to say that you have a “Full National Federation of Spiritual Healer certificate. or a full Reiki Master qualification, and two years post certificate experience”. To the HR mentality, it doesn’t matter a damn if you have a certificate in balderdash, as long as you have the piece of paper. How would they know the difference?

A lot of the pressure for this sort of nonsense comes, sadly, from a government that is obsessed with measuring the unmeasurable. Again, real management people have already worked this out. The management editor of the Guardian, said

“What happens when bad measures drive out good is strikingly described in an article in the current Economic Journal. Investigating the effects of competition in the NHS, Carol Propper and her colleagues made an extraordinary discovery. Under competition, hospitals improved their patient waiting times. At the same time, the death-rate e emergency heart-attack admissions substantially increased.”

Two new government initiatives provide beautiful examples of the HR mentality in action, They are Skills for Health, and the recently-created Complementary and Natural Healthcare Council.(already dubbed OfQuack).

The purpose of the Natural Healthcare Council .seems to be to implement a box-ticking exercise that will have the effect of giving a government stamp of approval to treatments that don’t work. Polly Toynbee summed it up when she wrote about “ Quackery
and superstition – available soon on the NHS “ . The advertisement for its CEO has already appeared, It says that main function of the new body will be to enhance public protection and confidence in the use of complementary therapists. Shouldn’t it be decreasing confidence in quacks, not increasing it? But, disgracefully, they will pay no attention at all to whether the treatments work. And the advertisement refers you to
the Prince of Wales’ Foundation for Integrated Health for more information (hang on, aren’t we supposed to have a constitutional monarchy?).

Skills for Health, or rather that unofficial branch of government, the Prince of Wales’ Foundation, had been busy making ‘competences’ for distant healing, with a helpful bulletted list.

“This workforce competence is applicable to:

And they have done the same for homeopathy and its kindred delusions. The one thing they never consider is whether they are writing ‘competences’ in talking gobbledygook. When I phoned them to try to find out who was writing this stuff (they wouldn’t say), I made a passing joke about writing competences in talking to trees. The answer came back, in all seriousness,

“You’d have to talk to LANTRA, the land-based organisation for that”,
“LANTRA which is the sector council for the land-based industries uh, sector, not with us sorry . . . areas such as horticulture etc.”.

Anyone for competences in sense of humour studies?

The “unrepentant capitalist” Luke Johnson, in the FT, said

“I have radically downsized HR in several companies I have run, and business has gone all the better for it.”

The provost’s newletter for 24th June 2008 could just be a delayed reaction to this piece? For no obvious reason, it starts thus.

“(1) what’s management about?
Human resources often gets a bad name in universities, because as academics we seem to sense instinctively that management isn’t for us. We are autonomous lone scholars who work hours well beyond those expected, inspired more by intellectual curiosity than by objectives and targets. Yet a world-class institution like UCL obviously requires high quality management, a theme that I reflect on whenever I chair the Human Resources Policy Committee, or speak at one of the regular meetings to welcome new staff to UCL. The competition is tough, and resources are scarce, so they need to be efficiently used. The drive for better management isn’t simply a preoccupation of some distant UCL bureaucracy, but an important responsibility for all of us. UCL is a single institution, not a series of fiefdoms; each of us contributes to the academic mission and good management permeates everything we do. I despair at times when quite unnecessary functional breakdowns are brought to my attention, sometimes even leading to proceedings in the Employment Tribunal, when it is clear that early and professional management could have stopped the rot from setting in years before. UCL has long been a leader in providing all newly appointed heads of department with special training in management, and the results have been impressive. There is, to say the least, a close correlation between high performing departments and the quality of their academic leadership. At its best, the ethos of UCL lies in working hard but also in working smart; in understanding that UCL is a world-class institution and not the place for a comfortable existence free from stretch and challenge; yet also a good place for highly-motivated people who are also smart about getting the work-life balance right.”

I don’t know quite what to make of this. Is it really a defence of the Brain Gym mentality?

Of course everyone wants good management. That’s obvious, and we really don’t need a condescending lecture about it. The interesting question is whether we are getting it.

There is nothing one can really object to in this lecture, apart from the stunning post hoc ergo propter hoc fallacy implicit in “UCL has long been a leader in providing all newly appointed heads of department with special training in management, and the results have been impressive.”. That’s worthy of a nutritional therapist.

Before I started writing this response at 08.25 I had already got an email from a talented and hard-working senior postdoc. “Let’s start our beautiful working day with this charging thought of the week:”.

He was obviously rather insulted at the suggestion that it was necessary to lecture academics with words like ” not the place for a comfortable existence free from stretch and challenge; yet also a good place for highly-motivated people who are also smart about getting the work-life balance right.”. I suppose nobody had thought of that until HR wrote it down in a “competence”?

To provoke this sort of reaction in our most talented young scientists could, arguably, be regarded as unfortunate.

I don’t blame the postdoc for feeling a bit insulted by this little homily.

Now back to science.