This is a story of everyday researchers and teachers, struggling to do their job in a world pervaded by management bollocks.

This page is a continuation of the diary that started in June 2007, with the demise of UCL’s Pharmacology department (for the time being). It continued

Drove to University of Warwick to give a talk on the misinterpretation of P values. Although it was billed as being a seminar of the Department of Statistics, the number of real statisticians there was disappointingly small. But there was no serious dissension from my ideas.

On the way home, the skies opened. The rain was so heavy that we left the M1. Eventually we knocked on the door of a randomly chosen house to seek refuge. We were made very welcome and given coffee and biscuits. It turned out that our saviour was the author of "The Worldwide Adventures of Rohini Molini: a series of stories designed to inspire and teach young children about the wider world in which they live" I never cease to be amazed by the kindness of (most) people.

Went to see the Ramanujan film, The Man Who New Infinity. Excellent film, though almost devoid of maths. But it’s an amazing and romantic story, with a tragic ending. I first learned about 1729 when I was a postgraduate, and been fascinated ever since.

Donned the kilt again, for the Royal Society soiree. A good evening.

Garden party, for my 80th birthday, and Margaret’s 65th. The skies cleared just as people were arriving to give a lovely summer afternoon. Not as many pictures as usual, but here are a few. 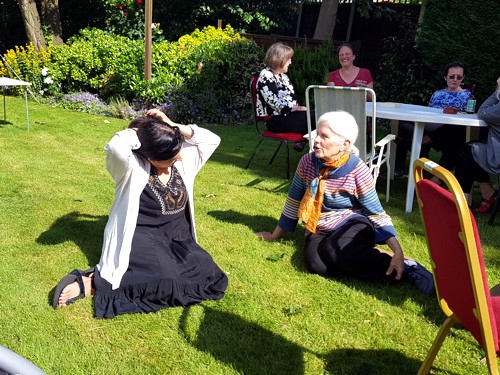 Luis Sexton and Anita Anand, with her son Hari (with the magnificent hair).

The next day. The problem with having abstemious friends is that they bring more bottles than they drink.

This diary page is now 6 months out of data. One reason for that is the turbulent year this has been for politics. Updates on politics are to be found mostly on my Facebook page and on my Twitter account. @david_colquhoun.