A colleague wrote to his MP to ask if anything could be done about the defrauding of the public by “psychic surgeons”. He wrote, in particular, about Stephen Turoff.

Turoff was the subject of the first episode of “Trust me I’m a Healer”, a programme that looked at “fake psychic healers”. They are the BBC’s own words (see badpsychics.com).

Psychic surgery is nothing but a total hoax.

Psychic surgery was discredited by the U.S. Federal Trade Commission in 1975. In a unanimous opinion, the commission declared that “‘psychic surgery’ is nothing but a total hoax.” Judge Daniel H. Hanscom, in granting the FTC an injunction against travel agencies promoting psychic surgery tours, said: “Psychic surgery is pure and unmitigated fakery. The ‘surgical operations’ of psychic surgeons … with their bare hands are simply phony.” (see here)

Eventually my colleague got an answer from Lord Hunt, junior minister at the Department of Health (generally loyal Blairite, but he did resign over Iraq).

The response makes one wonder what planet the minister is living on Psychic fraud a “profession”? And capable of self-regulation? This letter is just surreal. 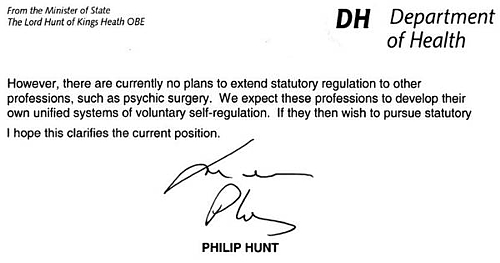 Clearly misunderstanding the nature of science is not restricted to any political party. In any case, regulation of crackpot medicine arguably does more harm than good (see Letter to the Times).

Most sorts of crackpot medicine are desperate to be “regulated” by the government. They know that the regulation is ineffective, and they know that it gives them a stamp of government approval with few obligations on their part. They can then claim to be “professional” psychic surgeons
(or whatever) and pretend to be proper doctors. And foremost among those pressing for this sort of phony respectability has been the Prince of Wales Foundation for Integrated Health (see here and here).

10 Responses to Lord Hunt thinks “psychic surgery” is a “profession”