Judging the ‘best talk’ proved easy since the judges were unanimous.

The Graduate Research day was held in an hotel because McGill wanted to charge more for rooms than the hotel did. This as not an external event put part of the Pharmacology programme. Always nice to know that boneheaded bean counters are everywhere.

Combining science (fact) and science (politics) in a single talkfor the keynote address, as I was asked to do, was harder.

Friday 9th May . Now for something completely different, the symposium on “Complementary and Alternative Medicine: Medical, Legal, Religious, and Multicultural Implications”, organised by the
Department of Religious Studies. 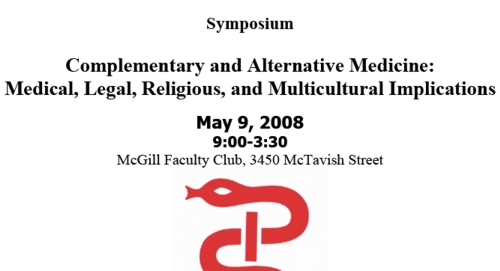 By a rather nice coincidence, I was listening to Radio 4’s Today Programme on web radio while shaving when the inimitable John Humphrys interviewed Richard Dawkins [listen to the interview]. Dawkins was asked for his opinion on a speech by Cardinal Cormack Murphy O’Connor, in which the leader of Roman Catholics in England and Wales said that Britain must not become “a God-free zone”. He’s too late though. It already has.

My contribution was “The Ethics of Alternative Medicine: Truth, Falsehood, and the Placebo Effect” [complete programme]. The meeting was in the rather fine Faculty Club (see pictures).

The Faculty club was pretty full, with people from a wide range of backgrounds Katherine Young (Prof of Religious Studies) analysed the Mayo Clinic Book of Alternative Medicine, The judgement (my paraphrase) seemed to be roughly ‘a coffee table book written to make money’. Her talk made a lot more sense to me than that from the lawyer, Michael Cohen, which started out as medical misconception and ended in comic strip science fiction.

Then to reception in the Religious Studies dept.There I had my hand rubbed by a reflexologist who assured me that it was connected to my lungs, She (inevitably) was totally unaffacted by anything
that had been said (see pictures).

There was an excellent talk by Joe Schwarcz who runs McGill’s Office of Science and Society, Chatting later, I got a copy of his latest book, An Apple a Day. The Myths, Misconceptions and Truths About the Foods We Eat, The chapter headed the Myth of Detox starts

“No wheat, no meat, no dairy . . … What do you call such a diet? “Detox”, say the food faddists. “Bizarre”, say serious nutrition researchers.”

Saturday 10th May
A day off. Walked to Old Town and port area. 14 C but warm in bright sun. Passed protests (pro-Palestine and anti-China) and old building, to Place Jacques-Cartier. Suddenly full of life. Then walked back through China town (see pictures).

Early taxi to Montreal Trudeau airport for flight to Hartford CT. Flew on beautiful Beechcraft 1900 (19 seats) with one other passenger, (lots of pictures)

Met in Hartford by my Yale host, Clifford Slayman. Had a relaxed Sunday, looking at Yale buildings (see pictures). While sitting on bench on New Haven Green, enjoying the sun (and pipe), we got into discussion with a couple who were looking for homeless people to help them (with vouchers for Dunkin Donuts -no, seriously). Needless to say the motive was evangelical. They claimed to be Roman Catholic, but their views on creationism and global warming were more like the christian taliban of the southern states, They sseemed to realise that we weren’t taking them entirely seriously, and we got cursed!

Round the labs, and a good long chat with Fred Sigworth (co-author of the chapter on methods for analysis of single ion channel data)

At 1200, the ‘endarkenment’ lecture concentrated on Integrative baloney @ Yale. Many of Yale’s real scientists seemed to be unaware of what was going on. We may not have heard the last on this topic.

Back to science in the afternoon with the partial agonist talk (now with a movie that seems to help to explain the ideas to those with different backgrounds from mine).

Took rhe 08.14 Metro North train to New York, Got off at Harlem-125 Street station, the stop before Grand Central (pity to miss than beautiful building), where I was met by old friend and colleague, Steven Siegelbaum. Several good talks with people at Columbia, Amy MacDermott, Ming Zhou, Wayne Hendrickson and Arthur Karlin, before ion channel seminar.

Then to dinner with Siegelbaums and Arthur Karlln. Picked up by Lorna Role’s driver (no, that isn’t a joke) and driven along Long Island to their beautiful place in Port Jefferson, where I met David Talmage for the first time (he’s in Pharmacological Sciences -they still have pharmacology too). (see pictures)

Yet another wonderful day on the (huge) campus of Stony Brook (SUNY). Old friend Lorna Role, now chair of Neurobiology at Stony Brook, turned up in time for ion channel seminar, and laid on wine and cheese afterwards. She’s as irrepressible as ever. The driven back to JFK for the overnight flight home.

One Response to Trip to McGill, Yale, Columbia and Stony Brook