In April 2004 I said “In the light of recent events, I simply cannot bring myself to visit the USA again, until civilised standards are restored”. That was shortly after the happenings at Abu Ghraib became public. It wasn’t a boycott. The idea just didn’t appeal to me. Well there is still another year to go before normal Western standards are restored, but I’m going anyway. I’ll keep a diary of what happens (it may be very boring). Here are some of the gigs.

Here are some pictures of the trip

On arrival at LA airport, a very helpful man showed me where to find the Ventura Bus. He then said he was a volunteer, and was collecting for homeless children. I told him I was a foreigner and he should ask GW Bush, not me. He said “George who? He’s not my president”. So I gave him $20.

The hotel is pretty good, but if you try to find this site on the computer in the lobby, it says “site blocked by parental access controls”. Hmm that should get in a few extra readers. Seems odd, though, because the first thing the TV set shows when turned is a long advertisement that tries to make you pay for pornographic movies and assures you that they won’t appear as such on your bill.

There was a lot of interesting stuff on protein folding and disorder. Good stuff on entropy-driven equilibrium binding. But disappointing insofar as most speakers made no attempt to bring together the ‘blancmange’ view of proteins with the discrete state view. Also disappointing in that some talks sounded more like sales-pitches than science.

While here, I got an email from UCL’s “Neuroscience data analyst”. This appears to be yet another administrative job. Thus far I’ve resisted the temptation to send them a single channel record for analysis.

Up at 5 am for shuttle and eventually got to Chicago at 21.20 after a cancellation and a 5 hour delay caused by snow (actually there wasn’t much).

Friday, January 18, 2008, 2:00 p.m. Science in an Age of Endarkenment: Some Examples from Scientific Fraud, Quackery, Religion and University Politics

It was a pleasure to be in such an excellent department, run by an old friend, Bob Eisenberg. It is modest in size and has high morale, thanks to having successfully (so far) fought off attempts to impose the culture of managerialism. It was also a pleasure to eat in the excellent Room 500, where the chairman every Friday entertains 12 of their 120 medical students to solicit feedback on the Physiology course. At UCL we have over 300 medical students per year and all such personal contact has long gone (as has any usable communal eating facility).

The taxi driver who took be back to O’Hare was as voluble, and as reactionary, as any London cabbie. The journey took twice as long as usual because of snow. The driver spent a lot of time cursing the slow progress which he blamed on immigrants and women drivers. He also said he hated Clinton and Obama. BUT most of all he hated Bush. It was not clear what is voting intentions (if any) were.

The State University of New York

Wednesday 23rd January Here I met old friends, particularly in the Auerbach lab. Their interests are very similar to ours and it was wonderful to find that their results and ours our mutually confirmatory, though the methods used to get them differ considerably. The young people in his lab a deeply impressive, and the hospitality, as everywhere, was superb. Lots of ion channel talk in the labs, but they opted for the endarkenment talk which is if interest to a lot more people. Buffalo, though has neither common eating places nor common rooms, and communication between groups with similar interests is even worse than at UCL.

There are some lab pictures here.

Scams on TV. When Fox News (YUK) appeared in TV I switched to bbc.com. Unlike the BBC at home, it had commercials (yuk again). And the first commercial was for Dr. Frank’s (homeopathic) Pet Pain Spray. Some singularly ancient and ugly dogs were seen to jump up from their deathbeds and run around like puppies. This most obvious scam might be worth a posting but it’s been done already by Disgruntled Chemist, and appeared on Randi’s forum. To add insult to injury, the same break advertised “detox” foot patches. Stick them on your foot and in the morning they are brown. I wonder if that is anyhing like the “detox” scam exposed so simply by Ben Goldacre in 2004?

There was a lot of snow in Buffalo, but they are used to it and on Wednesday night they drove me the 100 miles, past Niagara falls, to Toronto, without a hitch.

Thus far I haven’t heard a single good word said for George Bush. In academic circles at least, the view of that particular fruit of the endarkenment is not detectably different from that which you would find in Europe. Neither is there much difference from Europe in the the attempts to impose to impose the Wal-Mart culture on universities. The rule of science by MBAs is rampant, and is resented just as much in the USA as it is in Europe.

The original reason for coming here was an invitation from the Toronto Secular Alliance and Center for Inquiry. The talk for them was given a lot of publicity, for example here and here and from the totally admirable Orac.

As a result there was some media coverage (and a record 7109 hits on this site on Sunday).

I had a good day talking to folks in the lab and talking about single channels, followed by.Seminar Pharmacology, Thursday 24th January: On the nature of partial agonism: single channels allow a new way of looking at an old problem.

This talk has now been put on YouTube by my Canadian friends. You can see part 1, part 2, part 3 and part 4. but the slides aren’t really legible.

There was a pretty good crowd and the questions lasted almost as long as the talk. The Toronto Secular Alliance and the Center for Inquiry are a lively bunch, led by some young students, one of whom, Kate Fairbrother, made all the arrangements. They were just great. It was a particular pleasure to meet Larry Moran and the Toronto physicist, Amanda Peet. There are even some crits of the evening appearing now, e.g. from an undergraduate science student , and the Sandwalk blog run by Larry Moran, a professor of biochemistry in Toronto (The Sandwalk is the path behind the home of Charles Darwin), and here. It was also a pleasure to meet Katie Kish, author of the Liberal Debutante site.

Media coverage of the endarkenment talk

(1) At 10 pm on Thursday there was a live radio interview with a Calgary station CHQR, The World Tonight with Rob Breakenridge. He turned out to be a sympathetic interviewer. The first half was about the UCL server saga. Listen to Part 2 here.

(2) An interview to the National Post (a newish right-of-centre national Canadian paper that was founded by the now-notorious Conrad Black). It was interesting that the reporter had views not unlike my own about the rise of the MBA mentality. That, he said, was what gave us Enron. The article appeared on page 2 of the National Post on Saturday 26 January under the heading “The Anti-Nutty Professor” (or download newspaper version as pdf file).

(3) Friday morning was spent at CBC recording with Michael Enright, for the Sunday Edition.

Then off to Oregon. A 4.5 hour trip to Vancouver (and another 3 hour time difference), followed (after interminable security checks) by a 1 hour flight to Portland on a Dash 8 turboprop. The last time I went to Vancouver International Airport, I flew myself there in Cessna 150 (from Boeing Field, via Friday Harbor). There is a picture of it here 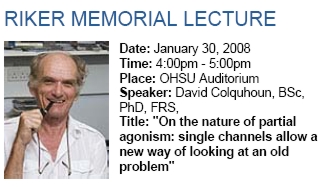 Wednesday evening and yet another excellent dinner after the Riker Lecture. I don’t know if I managed to get the audience as excited as we are about the ‘flip mechanism’ for ion channels, and its application to explaining the action of partial agonists, but it must be good since it is now, quite literally, engraved on a tablet of stone. 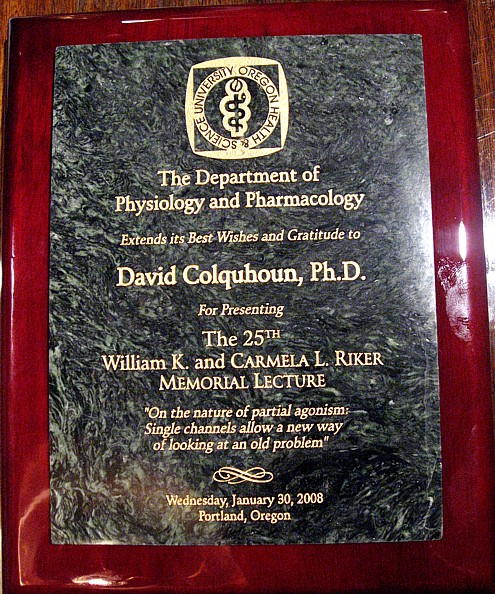 Seminar Thursday January 31 BSC 4340 Lecture Hall, 4:00pm – 5:00pm, Science in an age of endarkenment. Again this seemed to strike a chord. It seems that one thing that unites academics is a profound distaste for their (in)-Human Resources departments. Send me your own stories!

1 – 6 February Long Beach CA Back to science. We have two posters here, about our recent single ion channel work. It was a really excellent meeting, with lots of good talks and posters. What a pity that Long Beach (described by a French visitor as ‘toytown’) has few decent shops. It is urban sprawl personified. Apart from the work, the highlight of the visit was a tour of the Queen Mary (worth $22 for the engine roon alone). There are some pictures at here. It’s maiden voyage was two months before I was born, and it is a monument to the glory days of British engineering. Pity is hasn’t been maintained better. The state of the decks would not be tolerated by a real seaman.

I also, for the first time in several years, got to the editorial board meeting of the Journal of General Physiology. It is a journal that appreciates true quality. For 13 years the editor, Olaf Anderson, has led a superb systen and it works so well because the edirors are people who are at the top of their fields. They review the reviewers with care and expertise. Andersen’s approach is laid out in a recent editorial , in which he refers to the excellent analysis by Peter Lawrence, the Mismeasurement of Science. Some of the problems of the present system are highlighted in a accompanying JGP editorial: assessment of science is being handed over to a very non-transparent commercial company. The editorship will soon be taken over by Edward Pugh, whose enthusiasm for carrying on the best traditions of the JGP was inspiring.

4 Responses to Trip to America